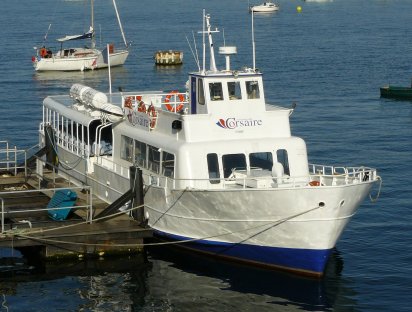 Vessel with classic lines, equipped with two engines for a speed of 10 knots, Belle de Dinard is the only capable boat of Compagnie Corsaire, thanks to the draught to backtrack from the Rance River to the old port of Dinan. She is also versatile and performs Bays of St. Malo and the mornings of sea fishing .. She can carry 196 passengers

For information on schedules, contact directly the Compagnie Corsaire.

Belle de Dinard was built in 1965 by the "Société Concarnoise d'Entretien Naval" in Concarneau. She was named "L'Aigette III" until 1988, then "L'Aberildut" in 1989 and "Belle de Dinard."