At the end of 2003, the Solidor 4 was renamed Aline. She was to be assigned to Senegal to replace the Joola, which was wrecked in 2002.

After a further postponement of his departure, the Senegalese government has decided not to use the Solidor 4 . For more information on the sinking of the Joola and its replacement

In 2004, the car ferry "Aline" still under the colors of the "Express of Senegal", thus remained assigned to serve Jersey and Guernesey within complementing Solidor 5 who encountered engine problems. She then operates under the banner of Emeraude Jersey Ferries (Emeraude Lines was absorbed by the group Sogestran). A little slower, he completed the connections St-Malo/Jersey in St-Malo/Guernesey in 1:30 and 2:15.

Emeraude Jersey Ferries closed permanently in 2004. Aline was sold in 2005 and became the Spanish PITIUSA NOVA for Iscomar (http://www.iscomar.com) on the route between Ibiza and Formentera.


In 2015, she sailed for Balearia as Formentera Direct on link Ibiza/Formentera 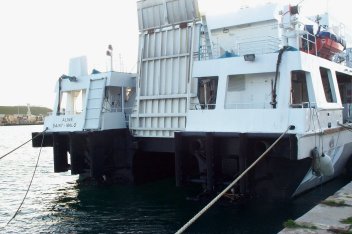