This story was produced in collaboration with Hervé Cozannet from Marine-marchande.net . You will find many other photos in the page that has written about this event .

Built in Australia by Strategic Marine in Henderson, the Jacques Cartier has been placed on deck of Annemieke, a ship of the SAL company specialized in carrying heavy loads or large loads. Party on 1st July, the Annemieke made a stop in Singapore to fuel before heading to Saint-Malo. After a passage through the Suez Canal, the Annemieke approached Saint-Malo on 27 July 2007. 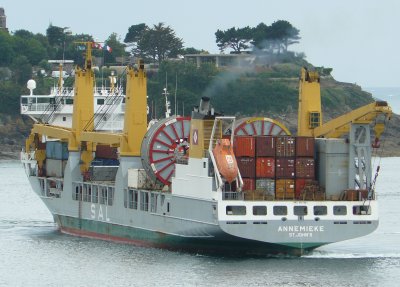 At 13:15, the harbour pilote goes on board off Cézembre and guide the Annemieke in the channel to moor in rade of Dinard.

At 13:50, Annemieke swings in front of Dinard and aligns herself in the axis of the Rance between two large moorings.

14:05, two tugs involve to complete the docking on coffers. Davier retrieves capella hawsers for the coffers while the Grand Bé pushes the Annemieke to port to keep her in line.

14:40, the Annemieke is stopped and unloading can begin. The crew places the four bands that will raise the Jacques Cartier using the cranes on board. 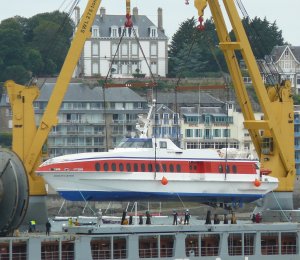 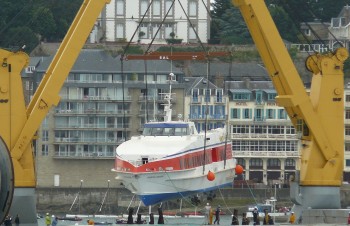 At 16:25, the Jacques Cartier takes off. The crane operators are rotating Jacques Cartier to move her between the cranes. The Annemieke plays on its ballast for balance throughout the manoeuvre. 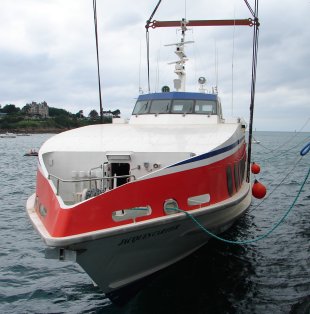 The Jacques Cartier then joins the pier of the Gare Maritime de la Bourse, towed alongside by the tug Davier.